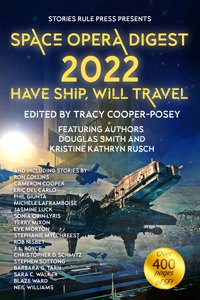 Ariana Rumala has inherited her father's fluxship, Big Top. For her first voyage, Rumala has called back the old crew, some of the strangest non-humans she's ever met.

Rumala has scored the crew a lucrative first contract: to transport one of the richest children in the known universe. If everything goes as planned, this will pay off her debts. A bit of sublight travel, one flux jump to Pavo Station, deliver the cargo, pay the crew, and Rumala could be in the black.

But flux is unpredictable. Ships can end up where they aren't supposed to be.

Can Rumala get the ship to its destination, hold together a diverse crew, and deliver the cargo, all before the debts come due?

Ariana Marlan Rumala gave what she hoped was a captain-like nod as one-by-one her colorful crew ambled, slid, or slithered past, packs in each hand, tentacle, or fur-hidden grasp.

At her side, Kip bounced on his toes, lips widening around fangs that overlapped his lower jaw.

She'd been raised on this fluxship. _Big Top_, her father had named it. The man was fascinated by ancient circuses, grand shows where anything could happen.

"Yes," Rumala answered. _Hell, yes._ Something more sober than this ludicrous red-and-white striped hull, reminiscent of the huge tents of old Earth that hosted all manner of strangeness.

She chewed her lower lip, forced herself to stop, and squared her stance. _Look like a captain._

Rumala glared at the genmod Human. Kip was a competent sublight Nav, she reminded herself.

"Call her captain," said Murmurk quietly, gaze on his tablet, reviewing the manifest.

Murmur, an endo-bio Sivid-Cesstine-Elabara-Brae, stood nearly tall enough to brush the ceiling with his bare, pink head, his earlobes bound behind his neck in his species' formal fashion.

Rumala had likewise gone to some trouble for her own formal uniform. Blue on blue, as unlike her father's casual yellow-and-red as possible.

_Knee high to an Engedu_, he was about to say. Then the story about that one time....

Had it been a mistake, to call back her father's old crew? She could have started over. Some of these people had known her in diapers.

"You could be Nav Two," Murmurk said pleasantly, his tone at odds with the threat. "I'd wager Stranz would be happy to move up. Everyone works."

"Going," Kip muttered, lips in a pout under his fangs. He slunk out the door, which, at Rumala's gesture, spiraled shut.

A new crew would have brought problems, too. If she could have found one. What sensible crew of any species--exo, endo, or ceph--went out under an untested captain?

Rumala looked through the wide bridge window at Donovan Station, glittering with lights of many colors.

The window was an actual mono-diamond viewport, not a screen, as one might find on a normal fluxship. The bridge was detailed with expensive bio-teak and garish gold trim, walls and ceilings painted by famous artists. On a nearby wall, a monkey rode a unicycle.

She kept expecting her father to show up, drunk and yelling, the crew ignoring orders that didn't make sense, smoothly ensuring that _Big Top_ didn't get stuck in flux, miss a station, or run out of air.

Then, one day, her father was dead. Shouldn't have been a surprise, given his love affair with intoxicants.

"Honored to be your Second. But there are things I need to know." He tapped the tablet with a glinting, pale claw. "You've hired the old crew." He nodded approval. "Also the most expensive Flux Nav Myndympar twins your father ever engaged. You pay lavishly for their fame. Why?"

Rumala felt herself tighten. Nav was one of the many huge expenses of a fluxship. Also the slush, a costly set of rare minerals the flux drive required. Accumulated docking fees and maintenance, too, while her father's estate got sorted. Licensing, food, medical. Crew.

The Myndympar twins. Few species could take a fluxship into the superluminal dimension. They were not cheap.

All in all, moving a fluxship from one point to another required a shocking amount of money. If only her father had left her some.

"Ariana. It's your ship. Just tell me why," Murmurk said.

Rumala stared at the moving lights through the mono-diamond viewport. Only a few were fluxships, painted in vivid, brilliant themes.

"There'll be ship chatter," Rumala answered. "I want it to be about the Nav twins." _Not about me._ "We'll need more contracts, and soon."

"May I see the financials, Captain?" Murmurk added.

"Of course," she said with a pang of dread. "At Pavo." After they had made the delivery and earned the bonus.

Suitable for someone who could afford a fluxship to himself, Murmurk meant.

Rumala's job as captain was to safely wed multiple forces: unforgiving hard vacuum, the insanity of flux, a variegated crew, and whatever cargo contract an untested captain could obtain.

"I did not skimp on provisions," she replied, trying to not think of the many debts she'd incurred.

The cargo had arrived.

Big Top is one of twenty stories in the anthology Space Opera Digest 2022: Have Ship, Will Travel.