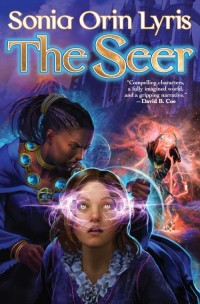 AmazonAudibleBarnes and Noble
Part of the The Seer Saga series:
Editions:Paperback
ISBN: 978-1476781266

In a world of magic, in an empire built on intrigue and the wealth of metals, a young girl named Amarta must sell her visions of the future to keep her family from starving.

What happens when Amarta comes to the attention of those with money and power? Will her visions be enough?

In a tapestry of loyalty, magic, and gold, Amarta and her strange ability will become the key to everyone’s ambitions. To survive, she must do more than predict the future.

She must create it.

The tall man dropped five silver falcons onto the rough wooden table. The coins clinked against each other, silver faces bright in the light of the single candle that Dirina had just sparked to flame.

Her hand went toward the coins as if of its own volition. She pulled it back, tucked it under the blanket wrapped tight around her shoulders.

If he wanted answers, he wanted Amarta, asleep with the baby in the small back room of the shack.
Her gaze went to the bright coins. Three were bird-side up, the king’s profile was on the other two. A good omen?

His large palm came down flat, covering the silver, breaking her focus. She looked up at his bearded face and met his dark eyes.

Now was moments after being woken by his pounding that shook the entire structure, dragging Dirina awake and off the cot where her sister and baby miraculously slept on.

Her gaze went to his hand, then back to his face, trying to make sense of this.

His expression told her nothing, but his cloak and coins and smell of horse said plenty. That her sister’s reputation had spread, again, far beyond this small mountain village to which they had come only last spring, before the baby was born. Where they were still welcome, if barely.

Were there really five falcons under his hand? Maybe she had imagined them.

She would tell him no. Come back tomorrow. When Amarta was rested. When Dirina could see him clearly in the daylight.

He picked up his hand, revealing the five coins again. For a moment her mouth moved silently.

Outside the wind picked up, blowing a roar through the trees, scraping branches against the roof, hissing through shutters that never closed properly, sneaking under the door that had to be bolted to stay shut in high winds.

But Amarta was exhausted. She had foreseen three times today already. Next week’s weather, when the goat would birth, how many kids, the arrival of trade wagons. So, today, they had eaten.

Dirina liked eating. Feeding the baby from her own body always left her so very hungry. She always wanted more food.

Also, rent was due, the roof needed patching, and the stove ate peat voraciously.

Five falcons. She ached to touch them.

The candle flickered wildly in a puff of air. On the walls, shadows danced with the flame’s motion.

“I’m sorry, ser,” she said, pulling her hand back again. “She’s too tired. She can be ready in the morning. At first light. Then she would be happy to answer–”

Her breath caught at his look. He scared her, this large stranger whose face she couldn’t read, who had five falcons to spend on a child’s divination in the middle of the night.

Even his clothes were odd. Loose, as if he had so much material he didn’t know what to do with it. Some kind of wool, fine and thick. She wondered what it felt like.

He made a noise. Sharp, displeased. Taking hold of a nearby stool, he pulled it to the table and sat. It creaked a little.

“One of us is going to go back there and get her. She might prefer it be you.”

Read all of chapter one here.